Posted by EboMike on January 13, 2018
Point-and-click adventure games were a refined art form in the 90s. Sierra, Lucasfilm, and Delphine would crank out games with elaborate stories, great puzzles, and gorgeous backdrops.

Sierra was known for its biting humor and frequent unpredictable deaths (in Space Quest III, if you just happened to pick up a piece of metal on the very first screen, you'd bleed to death). Lucasfilm took the opposite way and tried to avoid any kind of dead end, frequently mocking Sierra in the process. Delphine had nice tech, great music by Jean Baudlot, although its pixel hunting sucked (some objects had miniscule hotspots that were frustratingly hard to find, and missing them would steer you into a dead end many hours of gameplay later).

The genre slowly died out towards the next millennium to the point of near extinction, and I was excited to see that two point-and-clickers popped up in the past few years! Better still, one of them was helmed by Ron Gilbert, the mastermind behind many of the iconic Lucasfilm games from back in the day. Let's have a look.

Thimbleweed Park is decidedly trying to look retro with its super-low resolution and somewhat simple animations. At the same time, it's using parallax scrolling, reflection shaders on water and at least primitive lighting on the sprites just for that little modern edge, plus some postfx in later stages. Even the game itself is set in 1987, the year Maniac Mansion was released.

The gameplay is very reminiscent of the original Lucasfilm style, with possible verbs in the bottom left and the inventory to the right. Of course it has the classic player switch that has been a core element of the Maniac Mansion and Zak McKracken games, although TP spends decidedly more time exploring each character in detail (with a flashback segment for many of them to provide their backstory).

I found the experience surprisingly emotional - in part because it took me back. I hadn't played adventure games since I starting working in the game industry over twenty years ago, and only now that I'm out of it do I get to play one again! But also because of some of the story elements are well-presented and surprisingly sincere. Despite the tone generally being very humorous, you have plot pieces like a dead father floating around the game world as a ghost, desperately trying to talk to his daughter but being unable to do so.

The developers worked hard to recreate the glory of the olden days, and it paid off. I found it a thoroughly enjoyable experience with the perfect mix of original adventure gameplay but with enough modern elements so it doesn't look or feel dated. If you grew up with those adventure games, this game is simply unmissable. If you didn't, it's worth checking out just to see what you missed out on.

And then there's Deponia. I'll say it up front: It's a German game. And you know what they say about German humor. I mean, look at me.

Despite that, it actually is pretty funny, and the localization is really well done. In fact, I played the vast majority of the game in English and mostly just tried the original version to get a feel for it.

It makes good use of the point-and-click gameplay and brings those times back very well. Many puzzles are well-designed, although there are the occasional random ones that don't make any sense.

The biggest problem though is the main character. He sucks. He's a total asshole, and deliberately so. I guess it's meant to be funny, but it simply prevents me from creating any emotional link to him whatsoever. He is completely inept and basically mistreats any other character around him. His ex-girlfriend becomes a running gag, she left the protagonist on account of him being a useless dick, but it seems like somehow we're supposed to think she's the annoying one. And then there's the main female love interest of the game who somehow seems to fall in love with the hero despite him having zero redeeming qualities whatsoever.

It still has genuinely entertaining moments, although the writers were trying really hard at times. I'm not going to mention that segment with the little kids who are begging you to help them (a request you adamantly deny), and you first lead them into the home of a pedophile and then give them an ink print of his dick.

Anyway, the game was still enjoyable enough and I stuck with it. Towards the end of the series though, the game had this remarkably racist moment that stood out. You're required to separate a woman - the only black character in the game - from her white boyfriend and then sell her to a circus performer-like dude where she's now forced to pretend she's a dancing monkey. 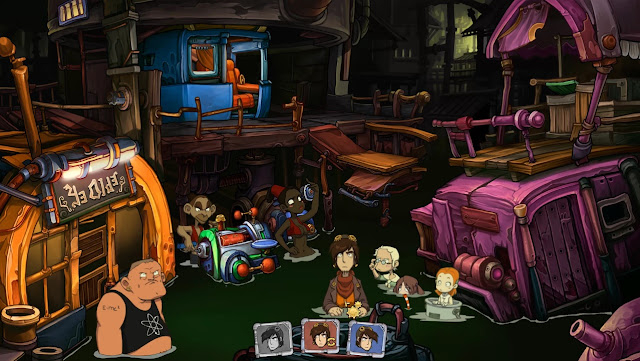 I can try to dig out my devil's advocate hat for a second here. The game was made by Germans. They have no idea about the significance of associating a person of color with a monkey. And seeing a black person in captivity being exchanged for money may not recall imagery of slavery to them.

But seeing how well the localization is done, a lot of Americans must have seen this, and apparently nobody thought to speak up and point out the issue here. (Well, if the recent H&M controversy is any indication, lots of people here aren't that aware either.)

As you probably guessed, several others have pointed this scene out, and you can imagine the general response on Twitter and in the comments - "what's the big deal", "total non-issue", "people just like to be offended". No, you ass, people just don't like blatantly racist imagery! This is moving into a topic that I could write a lot about, but that's enough material for a full post, so I'm going to go back on track.

I did finish the game despite having been on the verge of tossing it out after this... and... well. It's a decent game. Well done on the technical side, some good puzzles, although it doesn't come close to the finesse of Ron Gilbert's work.

Once thing though - Deponia allows skipping the dialog, while Thimbleweed Park forces you to listen to each recorded line in its entirety. I appreciate that they want you to enjoy the dialog, and it is great, but there are times when you really just want to move on, especially if you hear something repeatedly.

Also, Deponia has a button that shows all hotspots on the screen - THAT is great. Now that's really an invention Delphine should have had...

And finally, Deponia has savegames on their website for every single part of the game, so if you're stuck (and I did find a bug that made progress impossible), you can use those to get around it, which is a great service.


In closing - I need to reiterate that Thimbleweed Park is a must-play. Deponia, well, I don't regret playing it, and given the shortage of good point-and-click adventures, you should check it out if you're a fan of the genre. Be warned though, the forced humor and edginess can be very distracting at times.