I'm sorry something racist happened to you. You should have dressed better.

Posted by EboMike on July 12, 2016
I recently found this in my social media feed: 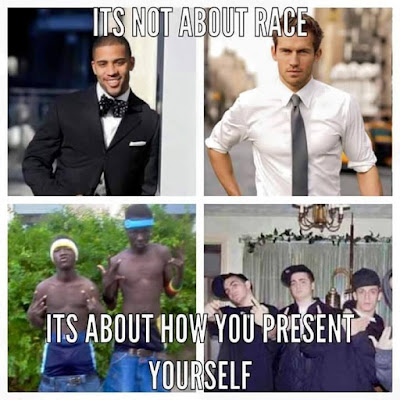 Originally posted by Right Wing News, it was shared by a) a brother who b) isn't Republican, so I didn't dismiss it outright and instead gave it some thought. And wondered... "something bad happened to you because of how you were dressed".... where did I hear that before? Oh, right, from rape apologists! It's this whole "she asked for it" shit again that justifies rape by blaming the victim. A woman wearing seductive clothing is luring those poor helpless guys that have no choice but to force themselves on her.

To whoever created this image: Fuck you. No seriously, FUCK YOU.

Going to the liquor store in a black hoodie to pick up some iced tea? Better wear that three-piece suit so you're not mistaken for a "thug". Don't even think about showing the officer your license and registration when you left your Armani threads at home. Leaving the strip club? Not without that dinner jacket you don't unless you want 50 bullet holes in you.

"Presenting" involves more than just clothing, but the message remains the same. I'm not even going to spend much time trying to discuss whether or not you're at a disadvantage during a police encounter or job interview if you're black. That has been established by so many studies and reinforced by so many numbers that it's a waste of time debating it. Let's give the author of this image the benefit of the doubt and assume that they acknowledge this inequality and simply want to give a helpful piece of advice to people of color and suggest that they maintain a clean and professional appearance at all time to offset this disadvantage.

While true, it puts the onus on the black population. Trying to solve race inequality by suggesting that they have to have a more sophisticated attire and exhibit exaggeratedly peaceful and non-confrontational behavior in order to get the same treatment is a workaround, not a solution. Not to mention that it doesn't even always help.

I want to go a little deeper on one of the origins of that inequality. There'll always be class A dirtbags like Zimmermann, but that's a lost cause. Likewise, there are inherently racist people who may not be aware of it (hint: If you ever try to justify anything objectionable with "I'm not even racist" or "I can't be racist, I have black friends", congratulations! You are racist!)

But I'd like to focus on the most subtle form. People who may genuinely not have racist tendencies but still manage to make this problem worse. I'm really generous with my use of benefit of doubt today will add Officer Yanez to that list.

Welcome to unconscious bias. If you haven't taken the test yet, take a couple of minutes and do it here: Harvard's Unconscious Bias Test - select the "Race IAT". No need to create an account, just proceed as a guest. Check it out and be disheartened. I'll wait here.

Back? Good. Unconscious bias is real, and it sucks. Google is huge on that - on your very first day of employment, they start talking it about it and suggest taking the test. They frequently encourage their employees to take classes to combat unconscious bias.

Even if you're "a normal white person" and don't feel like you have any prejudice in you, seeing a person of color may cause you to make certain judgments without even being aware of it. A Google UB class mentioned an interesting study where white people were observed entering a waiting room that had one brother and one white dude. The outcome was varied, of course, some people sat next to one, some next to the other. But the very pronounced observation was that whoever sat next to the brother hesitated for a few seconds first, meaning that they may have had reservations but made the conscious decision to override that.

And that's the key of it - you may be subject to unconscious bias, but if you're aware of it, you can decide to ignore it. And I find it bemusing that a tech company where the worst outcome of UB prevalence is that I'm stuck with more vanilla around me is more proactive on this issue than the police, where this is - without the slightest bit of exaggeration - a matter of life and death. There should be mandatory regular UB classes in law enforcement.

I've been on several ride-alongs, and I've seen first-hand the uneasiness that comes with every single traffic stop. Dozens of stops every day, typically the most mundane event in the world, but it takes just one in your many years on the job, one of the hundreds of stops you've done for a broken tail light where the driver is worried that you may pull his record and find out about that warrant and decides that he has a better chance popping a cap in you and taking off. So you treat every stop like it could be that one. So does this, combined with a lack of UB awareness, excuse what's happening? No. Fuck you, Officer Yanez. Even with all this in mind, nothing could possibly justify that. How trigger-happy do you have to be to pump four rounds into someone in front of his four-year-old kid to not realize that there is no threat whatsoever?

But back to you. What can you do to help this situation?

First, take the Unconscious Bias Test. Make yourself aware of its existence. Take some classes about it.

But most importantly - acknowledge that there is inequality. This is the biggest challenge - I've seen so many people refusing to see the problem by explaining it away, a non-issue caused by people through their attire or demeanor. But this problem is real, it has been around for a long, long time. We don't have more shootings these days, just more cameras.

I have no illusions that this post will make a shred of a difference. This is a problem that is fixed over generations, not years. Racism is handed over from one generation to the next in a charming display of family legacy and only slowly disappears as mindsets slowly mutate. But I see it in myself - over the course of two generations, my lineage evolved from "I have to change the channel when Tina Turner is on" to "I might make racist jokes but am generally indifferent" to "I only date sista girls". It'll happen. Just do your part.
always blame the victim BlackLivesMatter ignorance is bliss racism racist dickheads unconscious bias whitesplaining yes you too